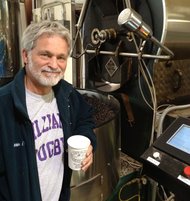 Dean Cycon ’75 prefers to be called a social activist rather than a businessman. His coffee business, Dean’s Beans, which buys organically and ethically grown coffee beans from 12 countries, began as an experiment to determine if a company that is wholeheartedly committed to fair trade could also turn over a healthy profit.

His experiment worked—the company has now been running successfully for more than 20 years and generates millions in annual sales.

Despite the firm’s financial success, in an interview with the Telegram & Gazette, Cycon insists “[The] way we measure our success is in the self-respect of our farmers. … Some companies dabble in fair trade to try and attract more market share. But really, you’re either all fair trade, or you’re not.”
Exciting things lie ahead for Cycon. This March, he will be the on-air host of a new PBS documentary titled Coffee: The Drink that Changed America. Dean and a British film crew journey across the U.S., telling the history of coffee in America and its relation to dissent and change worldwide. Watch this video for a preview.

Cycon has been awarded the Oslo Business for Peace Award (informally known as the Nobel Prize for Business), Best Practices Recognition from the Food and Agriculture Organization of the United Nations, and the United Nations Women’s Empowerment Principles Leadership Award for Community Engagement. In 2008, Williams College presented Cycon with a Bicentennial Medal for his commitment to using business as a vehicle for progressive social change.

SCROLL
Back to Top Ways to Give